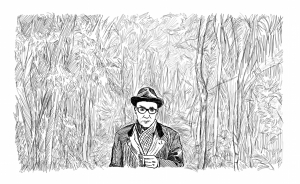 Asylum’s roving reporter Declan Tan headed to the National Theatre to give its Angel Headed Hipsters exhibition of private photos from the Beat Generation’s most famous poets the once over.

The Beats. Every right-minded reader, wannabe hipster or drug fiend aficionado has come across them at some point, either as a literary justification for their plundering scag habits, or in the form of a strategically placed book of poetry/cut-ups to intrigue those sporadic evening visitors.

And most likely because they’ve vindicated your Dionysian rationale by their very existence, you have a soft and fuzzy spot reserved for them and all of their travails.

If so, then here’s something for you: a tidy little exhibition showcasing the Beats and associated merry pranksters, with the slightly unappealing name ‘Angel-headed Hipsters’ (though a quote), opening at the National Theatre this week.

Read on for a gallery of the exhibition’s highlights and some mildly chaotic literary captions.

Click through for some of the gallery’s highlights. For each images we downed a pint of whiskey, a spoonful of peyote (and an ibuprofen) and tried to imagine how the beats would write magazine captions. Just go with it… man

The show features the beats in their prime, either posing for blurb shot posterity or simply out of their spindly faces on all manner of sought-after substances. There is portrait after portrait of the artists as young men, quietly frowning or drowning in their own iconoclastic juices.

“The main element of the exhibition shows them as friends in New York in the early 50s, four years before any of them became famous,” says theatre manager, John Langley. “They were all convinced they had a literary future, and they freed themselves to pursue it by taking menial jobs, which allowed them a level of comfort and, above all, mobility which would seem impossibly glamorous today.”

Ginsberg himself scribbled etchings and diary excerpts as captions for his pictures, and the exhibition often demonstrates his spasmodic ability to capture a mood and a moment. And on other occasions shows how he just plain forgot to twist the focussy thing. And anyway, it’s the booze and the drugs that draws us to them anyway, isn’t it? So he had a decent excuse.

For a group that wanted, fought for and, to some extent represented, freedom, they did a pretty decent job of finding it amongst the murder and the bullshit.

Make their acquaintance at the National in London until March 20.